Friday Feedback: Speaking my truth fearlessly, and asking you, How will YOU write forward?


"To tell the truth, Pop, there’s a whole slew of people missing points.


There are people busy condemning books they haven’t read.


And people trying to regulate who is allowed to write what."
- Christopher Myers, 2019 Children’s Literature Legacy Award Acceptance by Christopher Myers on behalf of Walter Dean Myers
A few years ago, writers, especially in the children's book market, started speaking out loudly. Calling out other writers. The underlying reasons were good. The initial motivation altruistic and important. We need diverse books. We need "own voices." Mostly no one debated this. At least not those in our industry. More importantly, mostly everyone wanted to help! Really! We chimed in. Amplified diverse voices. Shared diverse titles. And more.
And yet.

IMHO, like with religion wherein the core of each is good, yet the interpretation of each has sparked nearly every war throughout history, the WNDB/OwnVoices movement -- and motivations? -- seem in some instances to have morphed, gotten bastardized. I can't really think of the right words.


I won't go into further detail. If you're paying attention to our industry, you already know what I'm talking about. Articles have been written. Books have been cancelled. Anger and righteousness have been spewed.

Anyway, Christopher Myers says it best up there, and right here:


"And Pop, don’t get me started on Twitter.
You’d be amazed at the number of people who think they can say something
nuanced and important and
worth the time it takes to type it, in 280 characters.
I don’t think they love language the way you taught me to,
at least most of them don’t."


What I will say is that, while trying to lift others daily, I spoke out against the anger, the delivery, and the platform. I spoke out against the calling out that sent good people spiraling, into actual despair (yes, even non-white authors) while also suddenly seeming to sell the books of the callers-out in the process (which, yes, troubles me). I also spoke out against subsets of "other" left woefully out of the diversity conversation, especially Jewish authors, and Jewish books, and yes this continues, and yes I can give you examples if you need them.
As a result of speaking out (either on my private facebook page or a friend's private page), last summer I was essentially told I was tone policing (notable that I was only ever concerned with the behavior of either white writers or certain others who point blank told me they had zero duty of good faith) and asked to leave Teachers Write. I was told that despite (or notwithstanding) my politics,  my day to day actions in voting, marching, protesting, donating, lifting others, and simply doing my best to exist as a good human, that I was "not on the same plane about representation," and thus not worthy of being a part of TW anymore.
I decided last summer, when announcing it would be my last as part of TW, to gently share on my own blog here that I was not leaving my campers of my own volition.

In response, I was told not to speak about it, not to share my own truth, by a well-known children's book writer I barely know. Here's the DM I received: 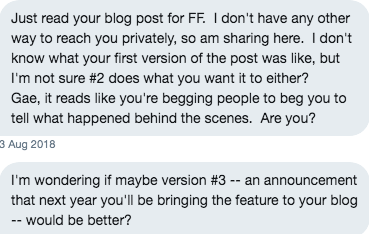 Begging people to know my truth? Actually, yes, perhaps that feels important to me.

So, this is me, now, on my quiet little blog that almost nobody reads anymore, speaking my truth, because sometimes the truth will, in fact, set you free.

I didn't want to leave Teachers Write. I was asked to leave.

So, this is me saying farewell to this feature I started so many years ago, before Teachers Write, when my first book was bought by fsg.

Please know, I did try to continue Friday Feedback this summer. But, without the community I helped build, especially on facebook (the page there having been my initial idea -- and me having been the one to initially breathe life into it and maintain the interest there even in the off season, but having since been archived though I requested to keep it), there's just not enough activity here. We had cultivated over 2,000 followers there, and though a few hundred of you have joined me on the new Friday Feedback page I started end of last summer, it simply isn't enough to bring enough of you here each week to justify asking guest authors to write posts, or even for me to put in the time it takes to
put each blog post together. Especially at this time in my life when I'm juggling teaching in-person novel writing classes as well as online (ask me about this!); four manuscripts in various stages of writing/production; a dog who needs walks and attention; my kids (who need versions of the same ;) ); a very part-time law practice; weekly, if not daily, activism; household to-do lists, and, of course trying to yoga and swim. Whew!

YES, this makes me sad.

YES, I will miss it and all of you (though presume I will continue to see all my hard-cores elsewhere. . . )

So, that's that. I have NO further need to discuss it all, and request that you refrain from bringing it up the comments OR ELSEWHERE (though I get this is public and I'm really not going to be able to stop you). Look, as they say, it is what it is, I know who I am, and I am more than ready to move forward with new ventures.

But where to leave you all?

I leave you with my sincere wish that you continue to write forward.

That you KEEP GOING.

So, here's my question for you:

You've started something you love.

You've started something you hate, but you've always wanted to write, and, heck, maybe you will love down the road.

You've yet to start something, but you have always wanted to.

How will YOU write forward?

How will YOU carve out the time a few hours a week, to do what you love, to do what moves your soul, to tackle this item on your wish list? To be who and what you want to be?

I've said this over and over again, the time IS there. You have to carve it out. You have to make it, then TAKE it.

Here are a few thoughts I shared with my in-person novel writing group last night for when our weekly classes end in two weeks, and fall sets in and busy fall schedules ensue:

Pick two times per week that could work for you to write (say, Wednesday nights when you used to come here to class anyway, and Sunday mornings before everyone else wakes up. Tell your partner, your kids, your dog, this time is YOURS. That you're a writer. And that's what you will be doing during that time. Better yet, leave your house for the library, the local coffee shop, a park, the beach, etc. for those hours. Heck, sit in your car in the driveway if it's too late at night to go anywhere.

Engage in physical activity/see the world (or just around your local world). Sitting staring at a blank page or screen, especially when you're "stuck" will rarely get you going or inspired. Go for a swim, a bike ride, a walk. Go do something new you've never tried before. The world is full of endless inspiration. Write into yours.

So, how will you write forward? I'd love you to share your intentions in the comments, along with your excerpt for feedback.

Now, without further ado, let's Friday Feedback. You know the rules (but in case you don't, read them here: THE RULES).

Here's another excerpt from an adult manuscript I'm working on. A few weeks ago, you saw Paul. This is a glimpse of his wife, June.

Looking forward to reading yours.

June Sobel sits at the living room window, across from the piano, and stares out at the patchy lawn. She’s not thinking about the small lump her OBGYN found in her breast yesterday morning, or the biopsy she has to go in for next week. She’s thinking about Gabriel and the time he explained chord progressions to her, a moment that comes back to her lately, again and again.

“Since there are only so many chord progressions to choose from,” he’d told her, “you can’t protect them, or accuse other people of stealing them.”